Lithuanian society for the sudy of religions invites you to watch a recording of a public lecture The G├╝len Movement Unfolding: Turkish Islam in (Eastern) Europe.

Dr. Ismail Mesut Sezgin (RegentŌĆÖs Park College, University of Oxford, and Centre for Hizmet Studies) presented the origins of the Hizmet movement and its development after the failed 2016 coup dŌĆÖ├®tat, including current resettlement of its members in European Muslim communities, while Prof. Dr. Egd┼½nas Ra─Źius (Vytautas Magnus University) commented on the Turkish Islam within the landscape of Islam in Eastern Europe. The lecture and discussions were in English, moderated by Dr. Egl─Ś Aleknait─Ś (Vytautas Magnus University).

We absolutely condemn the unprovoked and unjustifiable cold-blooded aggression and actions of war against the free, peaceful, and democratic European country of Ukraine launched by Russia on 24 February 2022.

We stand in solidarity with Ukrainian academic colleagues ŌĆō individual scholars of the study of religions and Ukrainian Association of Researchers of Religion, the Workshop for the Academic Study of Religions (former Youth Association for the Study of Religions), as well as the people of Ukraine, who currently face the largest land invasion in Europe since World War II because of RussiaŌĆÖs shocking aggression.

Dear colleagues, you are not alone! Lithuanian society and the Lithuanian academic community are continuing to work on multilayered support for your country and your people. Lithuanian society has mobilised in support of the Ukrainian people and spread the word about the current deeply painful and extremely difficult situation throughout Europe. Financial aid for Ukraine has been gathered via various campaigns. The Lithuanian academic community has reached out to Ukrainian academic colleagues to demonstrate its solidarity and to offer its help. It has addressed leaders in Europe and worldwide. It has ceased cooperation with all academic institutions and programs, affiliated with the Russian and Belarusian governments. Groups have been formed for coordinating aid to Ukraine. Information campaigns promoting unity and solidarity with Ukraine have been started in Lithuania and other countries and will be continued.

On behalf of the Society, we strongly encourage Russian scholars of the study of religions as well as other Russian scholars speak out against the war and the regime responsible for it. The ongoing events are deadly not only for Ukraine, but for Russia, all Europe and the entire world. We call on you to speak out openly regarding your opposition to the war. Today it is crucial that everyone, in whatever position, makes every possible effort to stop the war.

In the wake of renewed Russian invasion of Ukraine we express our solidarity with the suffering Ukrainian people and our academic colleagues – scholars of the study of religions, who instead of conducting research and teaching students have to seek a safe haven against the bombing of their homes and cities. The scale and brutality of the military aggression unleashed by the Russian state against its peaceful neighbour demands that we take a stance and act without delay. In strong solidarity with the suffering Ukrainian nation we recommend that all member associations of the International Association of the History of Religions:

END_OF_DOCUMENT_TOKEN_TO_BE_REPLACED

In response to the decision of the Seimas (Parliament) of the Republic of Lithuania to not grant the status of state recognized religious association to the Religious Association of Ancient Balts Romuva (hereafter Romuva) on 27 June 2019, the Lithuanian Society for the Study of Religions hereby expresses its grave concerns regarding compliance of this decision to the main principles of the rule of law and democracy and the upholding of human rights, as well as the implementation of the principle of separation of state and religion.

END_OF_DOCUMENT_TOKEN_TO_BE_REPLACED 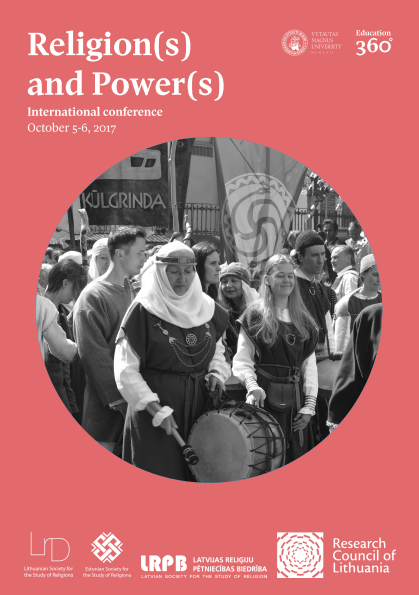 The conference will be held on October 5-6, 2017 at Vytautas Magnus University in Kaunas, Putvinskio str. 23.

A poster for the conference is also available for download below:

Other topics related to the conference theme are also encouraged.

Conference paper and session proposals must be sent by June 15, 2017. Please send your 250-300 word abstract and a 200-word personal bio to email: religiousstudieslt@gmail.com

Abstracts of the conference, that is starting in Vilnius tomorrow, are now published online.

3rd International Scientific Conference of the Lithuanian Society for the Study of Religions
LIFE HERE AND HEREAFTER: BELIEFS AND PRACTICES 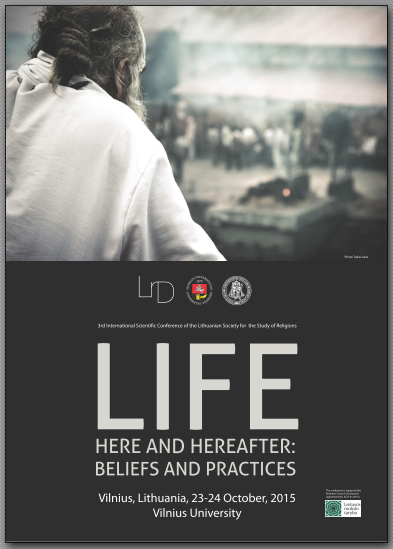